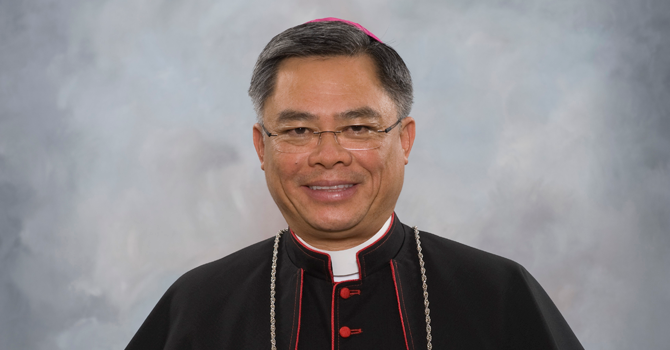 Bishop Joseph Phuong Nguyen was born in Vietnam. From a young age, Bishop Nguyen knew a deep love for God, and he consequently entered minor seminary at the young age of 11. After completing his high school education, Bishop Nguyen pursued studies in philosophy and theology in preparation for the priesthood. His vocation was not to be immediately realized, however, as the communist government of Vietnam took over all Catholic schools, hospitals and seminaries. Despite the immense danger, Bishop Nguyen secretly planned to flee from the country to try and realize his vocation. He told only his father about his plan before he left, leaving his family with the thought that they would never see each other again. Unfortunately, his boat was forced back to shore, and he suffered being jailed and tortured along with the rest of his group.
Remaining fast in his conviction, Bishop Nguyen made a second attempt to flee Vietnam with another wave of boat people and succeeded. A German tanker spotted their boat, rescuing them and bringing them to the Philippines. Bishop Nguyen thus spent some time in the Philippines’ Palawan refugee camp, during which he suffered a very serious car accident and was hospitalized for three months. As he matured, he became more and more uncertain of God’s will for him. He had left Vietnam in the pursuit of the priesthood, yet had encountered adversity and setbacks at every turn. The more he tried to follow God, the farther that it seemed that he was from his goal.
With God’s grace, he obtained sponsorship to Canada as a refugee. Yet in his new home, Bishop Nguyen struggled because he did not understand any English. Deeply discouraged, he wrote home to his father. Bishop Nguyen was uncertain that he could realize his dream to become a priest in a land where he could not even speak the language. His father wrote back citing the story of Jonah, who had been caught by an enormous whale and was spat out in Nineveh. There, Jonah had become a great leader and led people to God through repentance. His father went on to say, “…my son, that German tanker was the whale that led you to be where you are now, giving you the place where you will be fulfilling God’s will as a priest.”
Encouraged by his father’s letter, he looked for a job and worked as a painter. He began studying English as a second language and was accepted to the Seminary of Christ the King in Mission. On May 30, 1992, he was ordained as a priest by Archbishop Adam Exner, OMI. As a newly ordained priest, Bishop Nguyen was then assigned as Assistant Pastor with then Father Richard Gagnon at Saint Jude’s Parish in Vancouver. He was later assigned with Monsignor Dennis Luterbach at Immaculate Conception Parish in Delta, still later with then Father Stephen Jensen at Corpus Christi Parish in Vancouver. During this time, he also served as the first Chaplain of a new Pro-Life Prayer Apostolate, which still continues to this day in the Archdiocese of Vancouver. He was then assigned Pastor of Our Lady of Mercy Parish in Burnaby and finally at Saint Andrew’s Parish in Vancouver where he has also served as a member of the College of Consultors and the Presbyteral Council as well as a Judge for the Vancouver Regional Marriage Tribunal before becoming the Vocations Director for the Archdiocese of Vancouver. In 2013, he was appointed Vicar General for the Archdiocese of Vancouver.
On June 1, 2016, Pope Francis named Bishop Joseph P. Nguyen to become the sixth bishop of the Kamloops Diocese.  August 25, 2016, marked the first time that a Roman Catholic bishop was ordained in the city of Kamloops when Bishop Joseph was ordained and installed.  The historic event was well attended not only by locals, but also by many who had travelled from within the diocese, the Vancouver & Hamilton Archdioceses and as far away as Vietnam.
Bishop Nguyen’s journey to the priesthood has been long, but God has carried him along and has left him exactly where He wants him to be. His difficulties in pursuing his vocation have all been made worthwhile in exchange for being in the service of God.